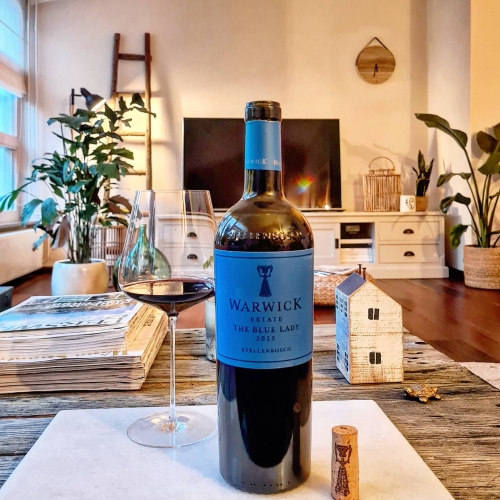 What does your weekend look like? Tonight we gonna have a virtual tasting with 17 wines between 70/100 euro. This week we tasted this 100% Cab from Stellenbosch / South Africa.

The manual harvest takes about four days, as it only takes place during the early morning hours to protect the grapes. The fermentation takes place with isolated yeasts from Bordeaux and the malolactic fermentation in steel tanks. Then the wine matures in French oak barrels for 27 months, which had previously been lightly toasted. After a minimal filtration, the 'The Blue Lady' was then allowed to mature in the bottle for twelve months.

In the glass a deep garnet red color.
On the medium(+) nose aromas of blackcurrants, blackberries and cassis with hints of forest floor, smoky tobacco, sweet cedar spices and chocolate.
On the palate dry, full-boied with medium(+) acidity and medium ripe tannins. Round mouthfeel with flavours that are a recall of the nose with extra hints of coffee, flowers and vanilla in the medium(+) finish. Already very tasty but even better in a few years.

Canadian native Norma Ratcliffe was one of the first female winemaker. She caused a sensation as the first female member of the Cape Winemakers Guild and maker of a favorite wine of the Spanish king Juan Carlos.

Until the end of 2017, the third generation was at the helm with son Michael Ratcliffe. Since then, Charles Marston and Kishore Bopardikar of the San Francisco Investment Company Eileses Capital have been in charge. They also took over the neighboring farm 'Uitkyk'. With this purchase, the Warwick winery expanded to over 700 acres of prime Stellenbosch terroir. Christiane Von Arnim joined Warwick as General Manager in 2018, a year after she hired talented cellar master JD Pretorius. Tom Orpen and Spencer Fondaumiere also share their expertise with the winery.