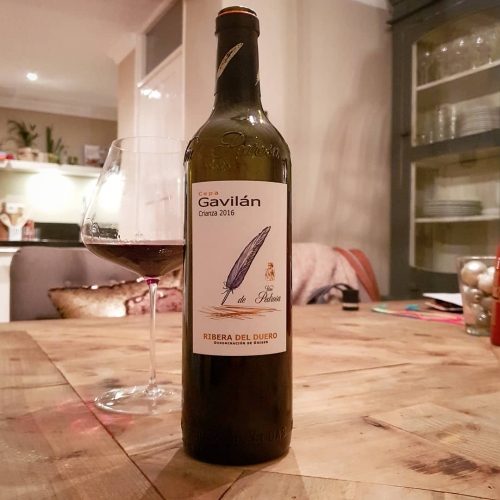 Viña Pedrosa - Cepa Gavilán Crianza Ribera del Duero 2016 (88 TSW)
Next week I will visit Ribera del Duero and to get in the Spanish mood I opened this entry level Crianza from Vina Pedrosa
Are you also a fan?

This is one of the great classics in Ribera del Duero and a real family business. Father Mauro Pérez planted his vines in the 40s and 50s, over 35 hectares, at that time an immense amount in the small village of Pedrosa de Duero. All the proceeds went to the local cooperative. Driven by the 3 sons, Benjamín, Adolfo and Manuel, it was decided to make wine in 1980. The first Viña Pedrosa was a fact. At that time there were less than 10 bodega active in the entire region ... It was only in 1982 that the D.O. Ribera del Duero itself was created, partly under the impulse of the Pérez Pascuas brothers; they were co-founders of the appellation.

Now about the wine:

The grapes used for this wine come from vineyards located in Pedrosa de Duero, at around 840 metres of altitude, which take up around 135 hectares of land. The vines are aged between 10 and 15 years. These are the youngest vineyards managed by the winery. The land where Cepa Gavilán Crianza is born, is clayey-calcareous. The climate is continental, with a considerable Atlantic influence.

After the corresponding vinification processes, the must of Cepa Gavilán Crianza is aged for approximately one year in French and American oak barrels.

The 2016 vintage beat the production record of the 2014 vintage. And not only in production, but also in quality due to the excellent weather conditions and the excellent health of the vineyards.

In the glass this wine shows a ruby red dress.
On the medium+ nose lots of ripe cherries and plums with well integrated hints of herbs, vanilla and ceder.
On the palate dry, medium+ bodied with balanced and round acidity and medium soft tannins. Flavours of blackberries, raspberries, plums with vanilla. Fresh and tasty. Excellent table wine that won't get bored easily. España Salud