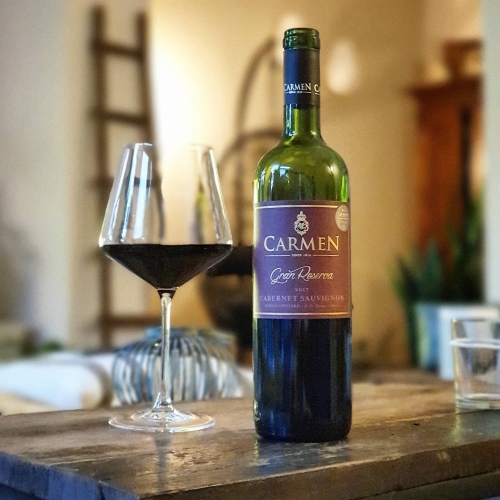 The Viña Carmen winery was founded in 1850 by the immigrant Christian Lanz and is one of the oldest wineries in Chile. Lanz opened the winery in Las Condes, a district of Santiago, Chile, and named it after his wife Carmen. It was acquired by Santa Rita in 1987 and today has major vineyards in Casablanca, Leyda, Colchagua and Maipo. Organic farming is practiced on fifty hectares of vineyards under the Nativa label

A total of six different lines are produced: Gold, Wine Maker's, DO, Vintage Blend, Gran Reserva, Premier 1850 and Insignia. Carmen was repeatedly honored as "Winery of the Year" by the prestigious magazine "Wine & Spirits". It was one of the Chilean wineries that rediscovered the Carmenere grape variety in 1996.

The grapes used for the Cabernet Sauvignon Gran Reserva come from the Les Quillayes vineyard in the Alto Maipo Valley. It is the highest, best location of the valley, which is located at the foot of the Andes. A twelve-day maceration period allowed for maximum extraction and color. The subsequent fermentation took place in steel tanks. Total maceration time was about thirty days. The subsequent malolactic fermentation naturally took place in the maturation vats. 80% of the wine matured for more than ten months in French and American oak, 20% of the wine matured in steel tanks. This was followed by further bottle aging for six months.

First I decanted the bottle.
In the glass a deep garnet red color.
On the medium+ nose aromas of black cherries, blackberries and smoky tobacco with hints of vanilla, cedar and green pepper.
On the palate dry, medium+ bodied with medium acidity and nice round tannins. Flavours are a recall of the nose with hints of cacao and dark fruits. Nice medium length finish. For sure a very well made wine and for the price even better.