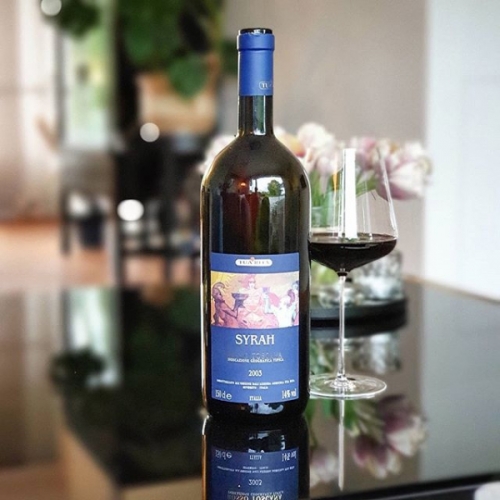 Tua Rita - Syrah Toscana magnum 2003 (92 TSW)
Two weeks ago I had the oppurtunity to try this Syrah magnum from Tua Rita.

Great to taste this red one at this age.
I guess that they have changed the name of Syrah to Per Sempre Syrah in the years. Only Syrah in the label is not available anymore.

In the glass a dark inky red color.
On the medium+ nose aromas of dark cherries, black currants and plums with hints of black tea, olives, herbs, cedar, vanilla and black pepper.
On the palate dry, medium bodied with medium acidity and nicely integrated tannins. Still full of life after 17 years. Flavours are a recall of the nose with rosemary and minty hints. Nice long aftertaste.

In 1984, Rita Tua and her husband Virgilio bought an estate in Suvereto that included two acres of vineyard. Not far from the Tyrrhenian Sea, picturesquely situated on a hill in the small medieval village of Suvereto, the initially small artisan winery has developed over time into a modern enterprise. At first they did not have the idea to build a top domain, but their meticulous care for this small vineyard quickly led to cult status in Tuscany.

Because their work proved so successful, they constantly bought vineyards and in 2014 the domain was expanded to 30 hectares. When Vergilio passed away in 2010, daughter Simena and her husband Stefano Frascolla became the daily helm of the domain. Meanwhile, the domain's good reputation had been made worldwide.

After the turn of the millennium, the wine cellar was expanded and redesigned for the production of high-profile products. Through minimalism and controlled inactivity, the very high quality of the noble drops is carefully preserved right into the bottle. The annual output of Tua Rita has long since left the four-digit range and has jumped to over 200,000 bottles to date.