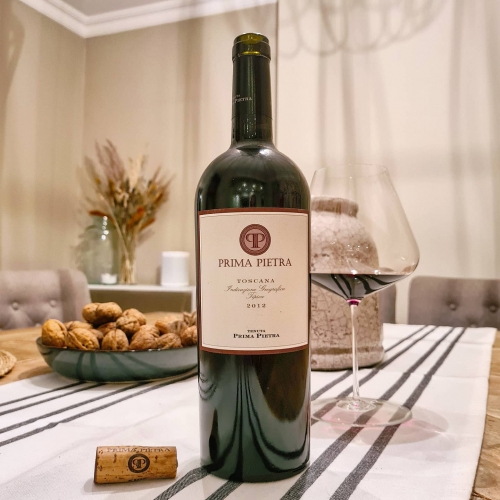 Tenuta Prima Pietra the winemaking project of Massimo Ferragamo, son of Salvatore, who acquired the 200 hectares property in 2002 (only 11 suitable for vineyards). The estate extends on a hill overlooking the Tyrrhenian Sea in the Riparbella area where the vineyard currently presents only 5 hectares planted with Merlot, Cabernet Sauvignon and Cabernet Franc located at the highest point of the Tuscan coast.

Castiglion del Bosco is another estate owned by Ferragamo.The first harvest was in 2007 while the organic winemaking certification arrived in 2016 to testify the seriousness of the path started in the previous years. The Tenuta Prima Pietra winery was built by recovering an ancient and pre-existing farmhouse.

The wine that owns the name of the estate is an exceptional blend of Merlot, Cabernet Sauvignon and Cabernet Franc, which, by chance, contribute to the mix with very similar percentages in line with those related to the division of the vineyard among the three grapes.

The grape varieties are harvested and expanded separately. The subsequent fermentation is temperature-controlled in steel tanks.The wine is then aged in French oak barrels for 18 months. Only then are the base wines put together and matured in the barrel for another 8 months.

First decanted the wine for one hour.

In the glass a luscious ruby red color.
On the medium+ nose aromas of ripe cherries, plums and dark berries with hints of cedar, spices and young leather.
On the palate dry, full bodied with medium+ fine grained tannins and medium+ acidity. Well rounded and balanced flavours of ripe blackberries, leather, cedar, vanilla, tobacco, licorice and bay leaf. Fruit on the long finish. Will even get better in the coming years.