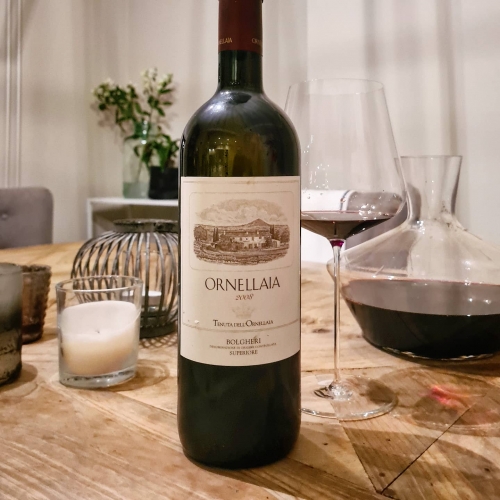 Wow. What a wine. I really enjoyed this iconic Bolgheri blend with 54% Cabernet Sauvignon, 27% Merlot, 16% Cabernet Franc and a splash of Petit Verdot. I decanted it for 3 hours and it was wonderful. The wine received 97 Robert Parker and James Suckling points.

In the glass a garnet red color with brick red around the rim.
On the medium(+) nose delicate aromas of dried cherries, blackberries, ripe plums and liquorice with well integrated hints of dried herbs, milk chocolate, earth and leather.
On the palate dry, medium(+) bodied with medium acidity and well integrated medium tannins. Beautiful balanced, round and complex mouthfeel. Flavours are a recall of the nose with a beautiful round and long finish. Drinking fabulous right now but can go for 5-10 more years.

Merlot grapes were harvested between 2–18 September, Cabernet Franc between 9–30 September, Petit Verdot between 17=26 September, and, finally, Cabernet Sauvignon between 24 September and 7 October. The clusters were hand-picked into 15-kg boxes and then graded and selected by hand on a double sorting table, before and after destemming, and finally soft-pressed.

Each grape variety and single vineyard block was vinified separately. Fermentation took place in stainless steel tanks at temperatures between 26-30°C for one week, followed by 10-15 days of maceration on the skins. The malolactic fermentation took place primarily in oak barriques, 70% new and 30% once-used. The wine then remained in barriques, in Tenuta dell’Ornellaia’s temperature controlled cellars for about 20 months. After the first 12 months of maturation, the wine was assembled and then returned to the barriques for an additional 8 months. After bottling, the wine aged a further 10 months prior to release.