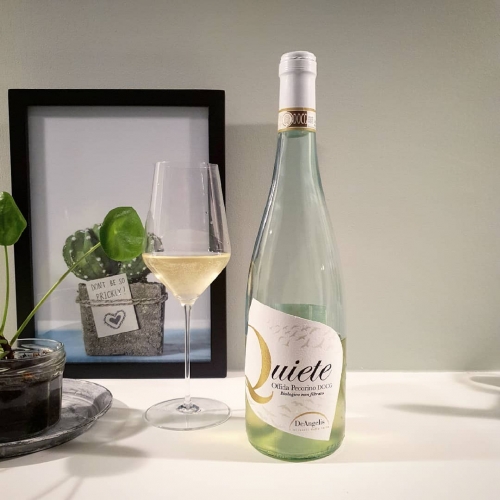 Just like the well-known Pecorino version, this unfiltered Bio version is also grown organically in the DOCG Offida. The difference lies in the vinification process. Where the classic Pecorino is mainly made on fruit, this non-filtrato is made more on intensity and structure.

After fermentation, the Quiete ripens for another month or four on tank and bâtonnage (stirring of the yeasts) is applied. The wine is then allowed to rest for two months so that the majority of the solid particles can settle. Afterwards, bottling is done, but without filtering. This means that some of the fine particles remain in the wine, which is therefore slightly cloudy.

In the glass a bright light cloudy golden citrus color.
On the medium nose aromas of yellow apple, pear and some tropical fruits with hints of white pepper, flowers and melon.
On the palate dry, medium-bodied with medium++ acidity and nice freshness. Inviting flavours of pineapple, stonefruit and melon with lemon, mandarin and a nice salinity. Little fizzle and lemon aftertaste.

Pairing with various Mediterranean dishes like fish, seafood, chicken or even white meat.

Tenuta de Angelis in Piceno (in the south of the Italian region of Marche, on the Adriatic coast), dates from the fifties of the last century. It took the founders a lot of effort to realise their own wine cellar and collect 50 hectares of vineyards. Fausti continued the work with a new wine cellar, more hectares and a change from quantity to quality.

Tenuta de Angelis has since become an established name with a strong reputation. The company makes wines from the classic grapes of the region, such as montepulciano, sangiovese and the rediscovered white pecorino, but also from internationally known varieties such as chardonnay and cabernet sauvignon.