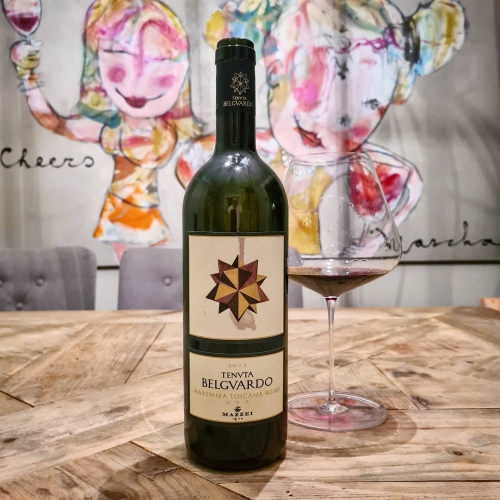 In the glass a deep ruby red color with purple reflections.
On the medium+ nose aromas of black cherries and blackcurrants with hints of tobacco, spices, vanilla, cedar and smoke.
On the palate dry, medium++ bodied with medium acidity and fine grained tannins. Warm round mouthfeel with a recall of the nose. The finish is persistent with spices and liquorice. Very enjoyable and will retaste in 3 years.

The Marchesi Mazzei family has been inseparably linked to Tuscany and viticulture since the 11th century. Ser Lapo Mazzei was the author of a historical document in which the term "Chianti" was first mentioned.

In the 1990s, the Mazzei family also acquired the Tenuta Belguardo, with 70 hectares of land in the hills between Grosseto and Montiano in the southernmost part of Tuscany, the Maremma.

After an elaborate and long analysis of the unique terroir on partly quite steep hills, which are foothills of extinct volcanoes and the Ore Mountains in the hinterland, it was decided to plant mainly autochthonous grape varieties such as Vermentino, Alicante and Sangiovese and only a few international vines such as Cabernet Franc, Cabernet Sauvignon or Syrah. 5,500 to 6,000 vines per hectare are relatively large in this region. The extremely good aeration of the Tyrrhenian Sea, only a few kilometres away, its light reflections and the low precipitation make it possible.