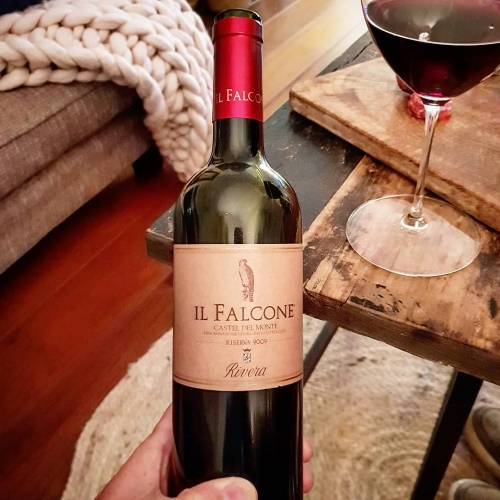 It was 1950 when Sebastiano de Corato launched Azienda Vinicola Rivera to exploit the potential for quality wine-growing in the Castel del Monte area. He achieved his aim and over time the winery has become one of the leaders in the renaissance of Puglia’s wine sector. Sebastiano’s son Carlo is now in charge, together with grandsons Sebastiano and Marco de Corato, and they continue to consolidate and build on the success story started by the founder.

Il Falcone is a red wine from Puglia whose name was chosen by Rivera to remember Emperor Frederick II of Swabia who built the castle called Castel del Monte near Andria so that he could indulge his passion for falconry. The castle later gave its name to the surrounding DOC area.
The wine is obtained with carefully selected grapes sourced from the oldest among the estate’s vineyards at an altitude of 200 metres asl on deep tufaceous and calcareous soils.
A blend of the indigenous grape Nero di Troia (70%) which gives its great character and structure while Montepulciano (30%) contributes to its roundness. The ageing for 14 months in oak (50% in barrique and 50% in 30hl French oak barrels) and an additional year in bottle prior to release contribute to refine its structure and complexity and develop its classic personality and elegance.