Back to overview Previous review Next review
search
Aug25 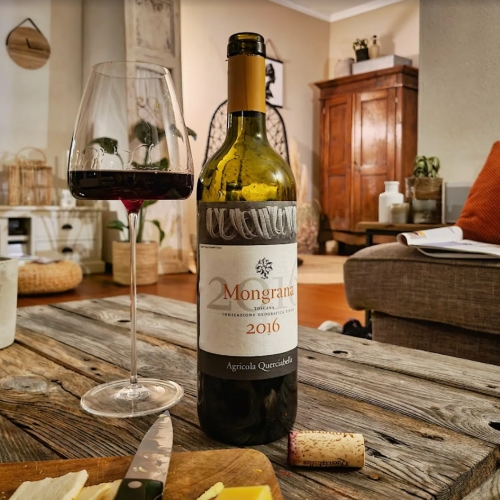 A blend of Sangiovese, Merlot and Cabernet Sauvignon.

The vineyards were planted in 2000 with a north-south orientation. The biodynamic approach has proven particularly suited to the acidic, iron-rich soils of Maremma, a mixture of silt and alluvial sand, sparse with areas of gravel and surface pebbles.

In the glass an intense ruby red color.
On the medium(+) nose aromas of sour cherries, blue berries and plums with hints of cedar, chocolate and lavender.
On the palate dry, medium(+) bodied with medium(+) acidity and fine tannins. Flavours are a recall of the nose with bonus notes of spices and earth. Very nice balanced with a rich medium(+) length finish. Great PQR for this wine with a price under 20 euros.

In 1997, having elevated to the pinnacle of success, Querciabella set eyes on the southern Tuscan coast as the next fertile ground in which to set roots, literally. At the time, Maremma was untamed, still steeped in wilderness. Querciabella chose the perfect canvas, a seaside estate of 42 hectares, to plant the first vineyards in 2000, cultivated biodynamically since inception.

Mongrana 2005 was the first vintage to be released, initially exclusively on international markets. The wine takes its name – and its character – from that of the noble family of knights depicted by the Italian Renaissance poet Ludovico Ariosto in his masterpiece Orlando Furioso.