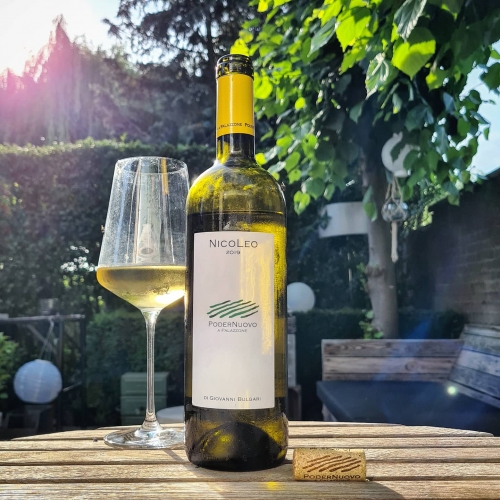 A lovely a blend of Grechetto and Chardonnay, grown in Palazzone, San Casciano dei Bagni, on soils with red clay, sand and silt. Nicoleo takes its name from Giovanni Bulgari's two sons: Nico and Leone. The harvest takes place in the first half of September; alcoholic fermentation takes place partly in steel at a controlled temperature, partly in barriques of 225 liters. The refinement lasts 9 months, again partly in steel containers, partly in 225 barriques, followed by another 5 months in bottle.

In the glass a bright straw yellow color with golden reflections.
On the medium nose aromas of white peach, lime and yeast with hints of flowers, green apple, vegetables and a drop of honey.
On the palate dry, medium bodied with refreshing acidity and nice minerality. Flavours of grapefruit, passionfruit, fresh-cut grass, vanilla, peach and yeast hints. The finish has a medium length (light waxy) with fruit and almonds.

To pair with fish and legume dishes, such as cod, black bean cream and arugula pesto, salad dishes and heartier dishes with meat.

PoderNuovo is situated in the southern corner of Tuscany, very near the triangle like border formed with Umbria and Lazio. Located in the tiny hamlet of Palazzone, historically the estate was a mere postal outpost on the important and strategic Via Cassia; the ancient Roman road that connected Rome with Florence and points north such as Lucca and Pistoia.