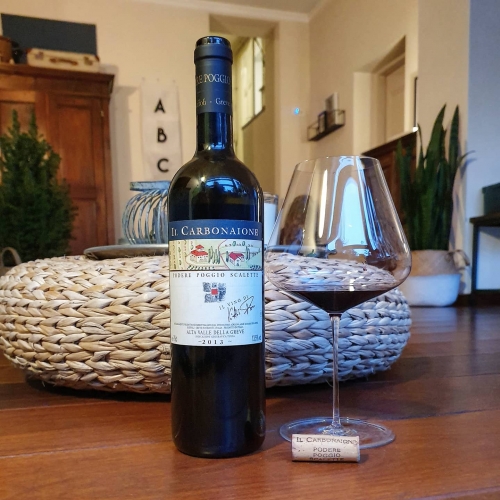 Poggio Scalette takes its name from the landscape, which is characterized by dry, stone walls supporting terraces on which the vineyards and olive groves are planted. From a distance the impression is of a series of stairs climbing the slopes of Greve. After the death of its previous owner, Poggio Scalette remained abandoned for years until Vittorio Fiore, one of Italy’s most famed winemakers, discovered the property in 1991 with his wife, Adriana.

In 1996, 42 additional acres of land became available, enabling them to expand. It was discovered that the plot of land known as Il Carbonaione was the first area to be replanted after World War I (1914-1918), which means these vines, more than 90 years old, are a rare example of the original clone of the famous Sangiovese di Lamole variety in the Chianti Classico area.
The slopes of the Greve Valley are without question some of Italy’s most ideal locations for vineyards and olive groves. The combination of exposure and soil composition contributes to the excellent quality of the wines and the extra virgin olive oils of the area.

Named for the river that passes through as it travels from a medieval hilltop town, this area happens to be one of the most important historical centers of the Chianti Classico region.

Decanter for 2 hours.
In the glass a deep ruby red color.
On the medium+ nose aromas of dark berries, plums and black cherries with hints of toast, chocolate, spices and some green hints.
On the palate medium+ bodied, medium tannins and acidity. Concentrated, elegant and round in the mouth. Long final with coffee hints. I would keep this for some more years in the cellar.