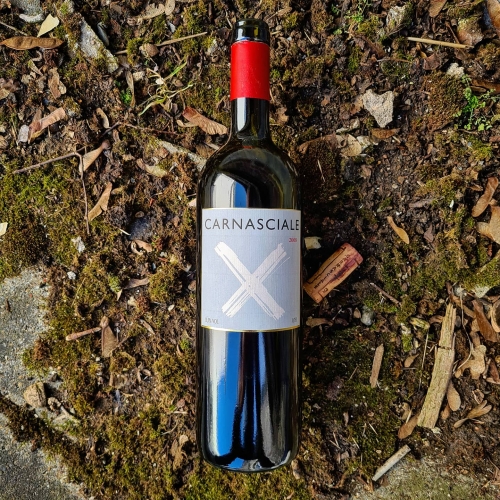 The genesis of the Podere Il Carnasciale sounds almost like a fairy tale. The farm, located between the Apennines and the Chianti Classico area in Mercatale Valdarno, a town in the province of Arezzo, has revived a largely unknown type of grape. The agronomist Remigio Bordini discovered about 50 years ago in the Colli Euganei near Padua, in an old vineyard, a vine that turned out to be a natural cross between Cabernet Franc and Merlot. That's why he called her Caberlot.

After meeting Bordini and the oenologist Vittorio Fiore in the eighties, the German advertising expert Wolf Rogosky decided to produce a delicious wine from the rarity. Since the 1988 vintage, the Caberlot has been the unrivalled size in the country estate acquired by the Rogosky family in 1972 with the intention of creating something special.

The vineyards of Podere Il Carnasciale were planted exclusively with Caberlot in 1986, 1999 and 2004 at a very high density of 10,000 vines per hectare. Once the grapes have been destemmed, the must is fermented in small stainless steel tanks at a controlled temperature.

During the vinification process, the acid degradation is initiated biologically. The ageing of the wines in mostly new French oak barrels - one third each coming from the Allier, TronÇais and Vosges regions - lasts 22 months. It is supervised by the oenologist and cellarmaster Peter Schilling.

The Carnasciale is Podere Il Carnasciale's second wine, first released in 2000 and made from the younger vines of the mysterious Caberlot variety.

In the glass a deep and intense ruby red color.
On the medium(+) nose aromas of dark cherries, plums and sweet spices with well integrated hints of licorice, mint, mushrooms and game notes.
On the palate dry, medium(+) bodied with medium(+) acidity and medium tannins. Concentrated with smooth and round mouthfeel. Beautiful and long finish.

Available in NL at @vinoandfriends