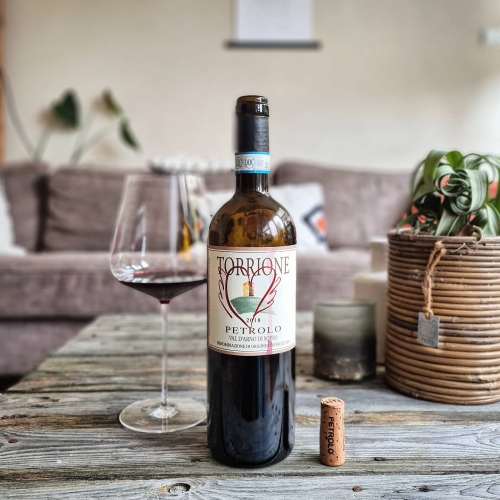 I recently tasted the 2016 vintage which was great but this 2018 is even better. A Tuscan blend with 80% Sangiovese, 15% Merlot and 5% Cabernet Sauvignon.

The 2018 vintage receives on its label a special loving heart, not only to celebrate this special occasion but also because 2018 is one of the nicest and endearing versions ever made. The new graphic was made with the contribution of Sabina Mirri, internationally acclaimed artist.

The first vintage dates back to 1988, at the end of a process of renewal of vines and of the general approach of the company. In those years it was decided to follow the true historical identity of this territory which has always been considered able to perfectly balance the different grape varieties, especially French ones, such as Merlot and Cabernet Sauvignon with Sangiovese, retaining the character of the Tuscan grape.

In fact, as early as 1834 Giorgio Perrin, an agronomist of Swiss origin, owner of Petrolo and honorary member of the Accademia dei Georgofili in Florence, reports in the “Giornale Agrario Toscano” that it was common in those times, at least in this part of Tuscany, that is the Chianti, planting “uve franzose” to blend with Sangiovese, which would not have altered the quality of our wines as it is the territory which prevails over the different grape varieties.

The wine rests in French oak barriques and tonneaux, of first, second and third year and in 40 Hl oak barrels of around 10 years, for approximately 15 months. During this phase the wine is left for the first 6 months on the fine lees, paying particular attention to its development.

In the glass this red shows a medium(+) ruby red color.
On the medium(+) nose aromas of blue- and blackberries, ripe cherries and pums with hints of smoke, spices, new leather, black olives and cedar tones.
On the palate dry, medium(+) bodied with fine grained medium(+) tannins and a lively acidity. The palate shows the same flavours as on the nose with great energy and a long delicious finish.