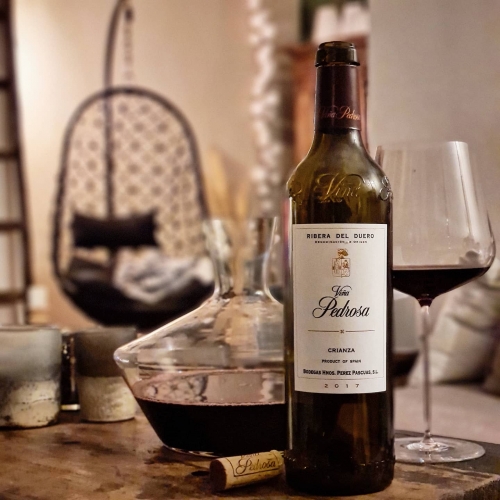 This is one of the great classic wineries in Ribera del Duero and a real family business. Father Mauro Pérez planted his vines in the 40s and 50s, over 35 hectares, at that time an immense amount in the small village of Pedrosa de Duero. All grapes went to the local cooperative. Under the impulse of the 3 sons, Benjamín, Adolfo and Manuel, it was decided to start making wine in 1980. The first Viña Pedrosa was born. At that time, there were less than 10 bodegas operating in the entire region.

It wasn't until 1982 that the D.O. Ribera del Duero itself was created, partly under the impetus of the brothers Pérez Pascuas; they were co-founders of the appellation. 1989 was also an important step for them, with the arrival of the 3rd generation: José Manuel, son of Benjamín, made his appearance as an oenologist. From that moment on, the wines would even get better.

Today the circle is complete with the full entry of the 3rd generation: Manuel's and Adolfo's sons have also become established values in the bodega.

The small bodega in the village has since then moved to the edge of the village. They ownn 135 ha, almost mainly old vines, which is unique in itself in Ribera del Duero.

Aging for 18 months in American and French oak barrels and then rest in the bottle for at least 6 months.

First I decanted this young wine.
In the glass a medium ruby red color with purple reflections.
On the medium+ nose aromas of dark berries, cherries and tar with hints of tobacco, spices, cloves, yogurt, vanilla and cedar.
On the palate dry, medium++ bodied with medium+ acidity and ripe tannins. Flavours of blackberries, plums, cacao, tobacco and mint with a nice round and balanced mouthfeel. The finish is medium+ length.

The next day I tasted another glass and the wine was perfect. I would retry in 2/4 years.