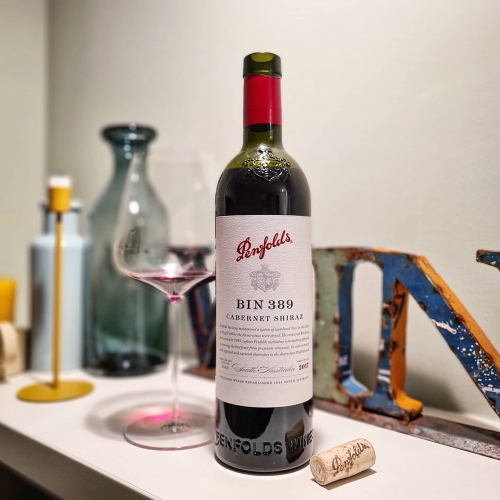 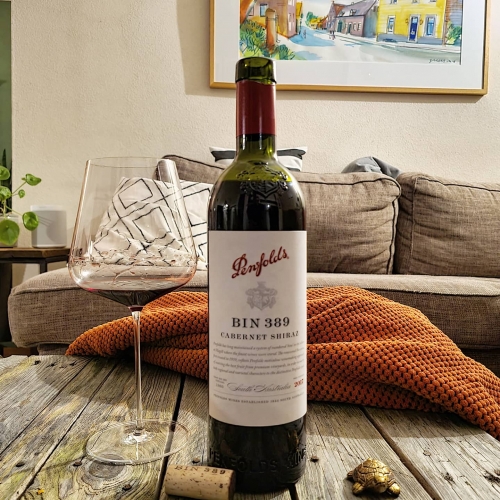 Two weeks ago we had a virtual battle between the wines of winemaker Lenz M. Moser of Chateau Changyu Moser (China) and some other favorites of him like the Penfolds Bin 389, Valbuena No 5 and Opus One. We had a great time.

This Penfolds Bin 389 is also often referred to as "Baby Grange", Penfolds' top wine. This is because part of this wine has matured in the same barrels on which the famous Penfolds Grange will later mature. The Penfolds Bin 389 was first released in 1960 by the legendary Max Schubert. This red wine is also one of the wines that made Penfolds great.

In the glass a deep purple red color.
On the medium(+) aromas of ripe blackberries, plum compote and blueberries with hints of tobacco, smoke, eucalyptus, vanilla and cedar.
On the palate dry, full-bodied with medium(+) acidity and medium(+) ripe tannins. Flavours of black cherries, blackberries and raspberries with mint, vanilla nd cigarbox notes. The finish is long, elegant and round. Already very nice and will improve with the years.

Penfolds is Australia's oldest and most iconic winery with a history and legacy that reflects the country's journey from colonial settlement to the modern era. The winery was founded in 1844 by Dr. Christopher Rawson Penfold who emigrated with his wife from England to South Australia to plant his vines obtained from France on Magill Estate.

The Australian wine industry, including Penfolds, changed dramatically with the arrival of winemaker Max Schubert who invented world-famous Grange and Bin wines. In 1988 Max Schubert was named 'Man of the year' by Decanter Magazine and Penfolds Grange 1955 is now listed as a national heritage.Today, Peter Gago is the Guardian of the Grange and sets the standard for all Penfolds wines.