Back to overview Previous review Next review
search
Feb1 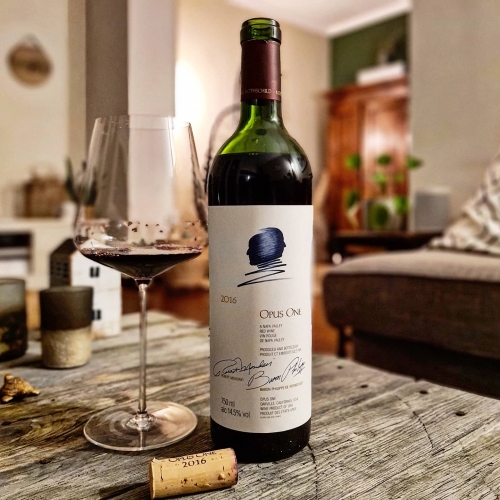 Two weeks ago we tasted this icon wine from the Napa wineregion. I really loved this wine and it was also my winner of the blind tasting. Still young but very nice already with a great potential for the comping 30 years.

This Cabernet Sauvignon dominiated Cuvée has a deep dark purple color.
On the medium(+) nose inviting aromas of black cherries, black currants and cassis with hints of smoke, balsamico, spices, cedar, flowers and minty tones.
On the palate dry, medium(++) bodied with great balance, complexity and elegance. Great round mouthfeel with a great structure, medium acidity and ripe fine grained tannins. Flavours are a recall which join with extra flavours of black olives, chocolate and herbs. The finish is never ending with chocolate hints. Close to perfection :)

Opus One is a joint venture established in 1980 between Baron Philippe de Rothschild from Mouton-Rothschild (1er Grand Cru Classé from Bordeaux) and Robert Mondavi.

The idea was to make a red wine mainly from Cabernet Sauvignon grapes from Napa, but in the style of a Bordeaux. Until 1982, the wine was called “Napamédoc”, reflecting the philosophy of the project.

In 1989 Opus One built a new, state-of-the-art winery in Oakville. The wine was already one of the most expensive in California at the time, but became even more popular in the 1990s thanks to high demand from both Europe and Asia and has now reached cult status. Although the cabernet sauvignon is the most commonly used grape, you will also encounter the other typical Bordeaux grapes in their blend: merlot, cabernet franc, petit verdot and malbec.

Before the wine hits the market - usually on October 1 - it is aged for 18 months in new French oak barrels and then another 15 months in the bottle. The label shows the silhouettes of Baron Philippe de Rothschild and Robert Mondavi.