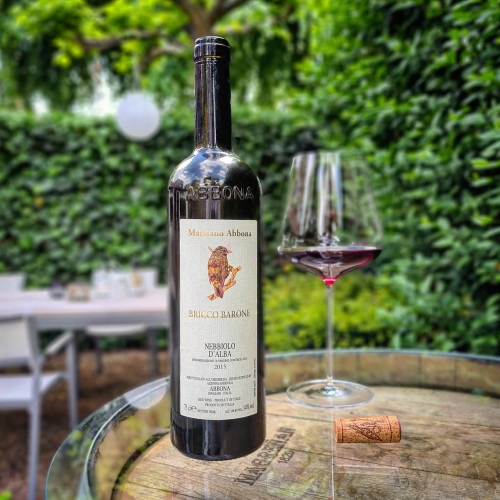 Spontaneous alcoholic fermentation using indigenous yeasts.The juice left in contact with the skins in stainless steel tanks at a controlled temperature. Dry racking follows, with transfer to oak barrels of 35 hectoliters. In barrels for 9 months, followed by assemblage in stainless steel, filtration, and bottling Then, the wine rests in bottle at a constant temperature for three months before release.

The wine ages for 9 months in large tonneaux barrels, followed by an additional three months in bottle before release.

In the glass a clear bright red colour with a light brownish rim.
On the medium(+) nose aromas of plums, dark cherries and roses with hints of leather, tobacco and spices.
On the palate dry, medium (+) bodied with medium acidity and tannins. Nice round medium(+) length liquorice finish.

Marziano Abbona was only fourteen years old when his father 'Papa Celso' died and he suddenly took over the helm of the winery of the same name. Marziano grew into an enthusiastic winemaker. However, he lacks the time to devote himself exclusively to winemaking. His main task is to oversee the wine production. Head winemaker is Giuseppe Caviola. His daughter Chiara is his right-hand man and a rising star on the rise. The annual production is 240,000 bottles. The company owns 42 hectares of vineyards.

The vineyards of Marziano Abbona are spread over several sub-zones in the Langhe sub-region. The best Barbera and Nebbiolo wines come from this zone. The soil, formed in the Miocene era, consists of limestone and clay. Due to the high humidity there is a lot of fog formation. The name Nebbiolo is also derived from this, 'nebbia' means fog.