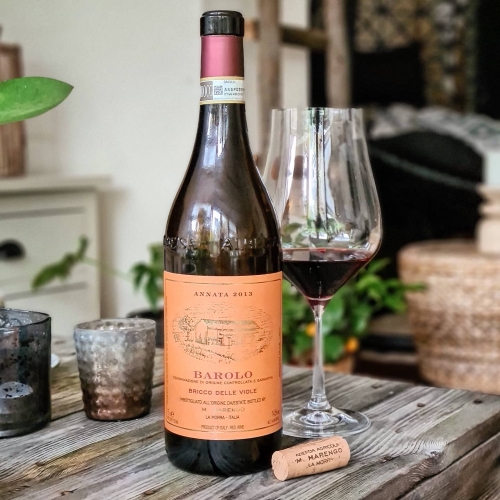 Marco Marengo makes exciting wines, but still is, one of those under the radar producers and as a result, the wines have tremendous value. With his small stock of 6ha, Marco makes some of the most stylish and characterful wines in the region. From Dolcetto to the fabulous Barolo, Le Brunate - they showcase the elegance and drinkability that should define great La Morra wines.

The Brunate, for which Marco has built up a great reputation, is the jewel in his crown. It is one of the largest cru's in Barolo and the typical La Morra style Barolo with its ethereal perfume and finesse tinged with a complex earthiness and refined but powerful tannins. Marco owns two plots of vines ranging from 15 to 70 years old.

The Bricco Viole is a very fine Barolo vineyard which translates as 'Top of the Violet Hill' and is one of the highest vineyards in the Barolo commune region, 400-450 meters above sea level. Marco's pack is blessed with a beautiful piece of 50-70 year old vines.

Like Marco's other Barolo wines, this Bricco Viole is fermented with ambient yeasts and undergoes malolactic fermentation in small oak barrel. The wine is aged in new (only 20%) and neutral oak for two years before release.

My tasting notes:
First decanted the wine for 2 hours.

In the glass a deep ruby red color with garnet reflections (deeper color then suspected)
On the medium(+) nose of dried cherries, raspberries and violets with hints of cedar, tar, hay, mint and barnyard.
On the palate dry, full-bodied with medium(+) acidity and medium(+) drying tannins. Still young and strong in the mouth with a recall of the nose and a spicy long final.