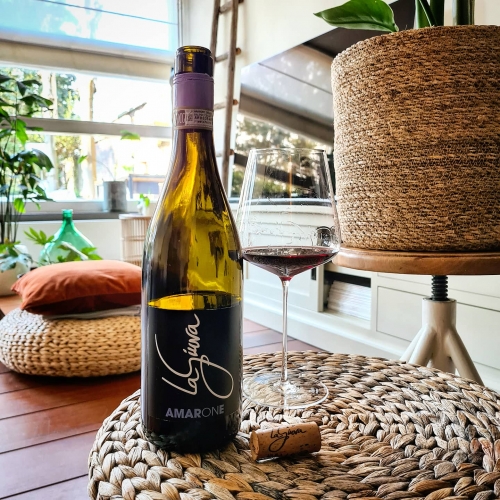 This week is a rainy one in the Netherlands. Amarone is always a good choice to warm you up.
Blend of 50% Corvina, 20% Corvinone, 25% Rondinella and 5% Oseleta-Croatina.

Traditionally, the grapes selected in the vineyard and dried in crates are vinified in December. After maceration at a natural, cold winter temperature, they are kept warm, which triggers the long fermentation, at a constant temperature of 24 ° C.

The following automatic pressing cycle, which lasts at least 20 days, ensures the right balance between maceration and pressing every last drop of the grapes. The fermentation ends in new barrels, in which the wine remains for at least 24 months. Bottle aging completes the process.

In the glass a deep purple color.
On the medium(+) nose aromas of dried cherries, ripe red cherries and cloves with hints of toasted cedar. chocolate and spices.
On the palate dry, full-bodied with medium(+) acidity and smooth tannins. Full and round mouthfeel with flavours like black cherries, dark chocolate, prunes and coffee. Not yammy but with enough freshness.

To pair with traditional dishes from the Veneto like Pasta e Fasoi, Brasato all’ Amarone and Bigoli col'Anara and of course beef, lamb, veal, roasted duck and mature and robust tasting cheeses.

This young estate was founded by Alberto Malesani, famous in Italy as a former manager of both Fiorentina and Parma. While at Parma, he won the UEFA cup in 1999. His passion and intelligence are now channelled into this estate, where he is helped by consultant winemaker Lorenzo Caramazza, formerly of Cantina Valpantena. The name La Giuva is a compound of his daughters’ names, Giulia and Valentina, who are also involved in the business.

The winery is situated in Val Squaranto, a small valley between the Valpantena and the valley of Mezzane. The vineyards are planted on the top of the hill, at an altitude of 350 – 400 metres. Production is tiny and won‘t exceed 50.000 bottles in a good year.