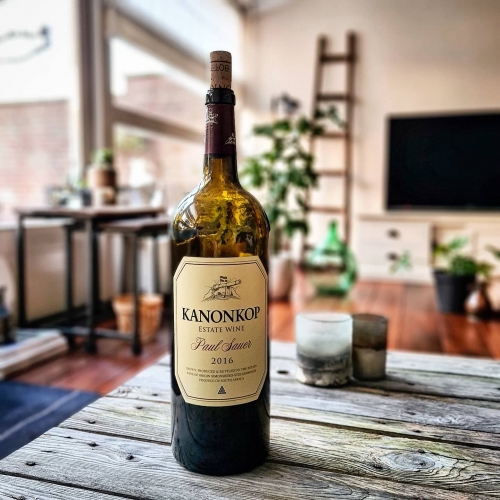 Stellenbosch blend with 62% Cabernet Sauvignon, 25% Cabernet Franc and 13% Merlot.
Drank from magnum during one of our virtual tastings.

Kanonkop is a 4th generation family-owned wine estate, which has been handed down from generation to generation and is now in the hands of brothers Paul and Johann Krige. The name Kanonkop is derived from a hillock (kop) on the Simonsberg mountain above the wine estate from where, during the 17th and 18th centuries, a cannon (kanon) was fired to announce the arrival of sailing ships entering Table Bay.

The roar of the cannon would be the signal to local farmers, who were waiting to make the 50-kilometer journey to the harbour, to load up their wagons with fresh fruit and vegetables to barter their produce. The first wines bearing the Kanonkop label were produced in 1973.

To wine lovers familiar with the centuries old châteaux and domaines of Bordeaux and Burgundy respectively, the winemaking history of our estate may seem surprisingly young. For 1973 was the year in which Kanonkop’s contention for a place in the annals of South African wine greatness began, just three years before the death of the man to whom the wine estate owes everything it has achieved and all the recognition it has attained: Paul Sauer.

Back to the wine:

In the glass a deep ruby red color.
On the medium(+) nose aromas of black currants, black cherries and plums with hints of spices, eucalyptus, red paprika, cedar and vanilla.
On the palate dry, full-bodied with medium acidity and ripe medium(+) tannins. Flavours are a recall of the nose with extra blackberries and a long spicy finish. Still very young - would revisit in 5 years.

A great accompaniment to meat casseroles, steak, roasts and a selection of well-matured cheeses.