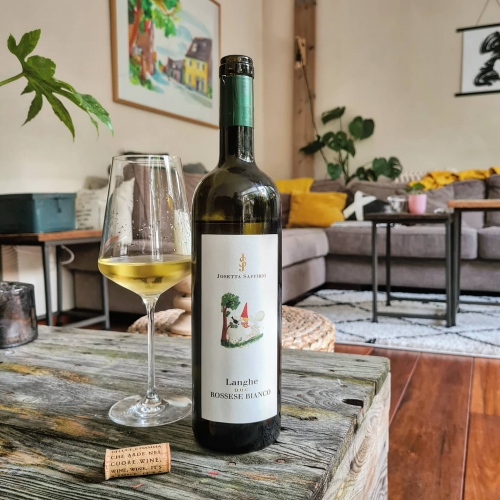 100% Rossese. The Vine, a native of the Cinque Terre, was born white grape and tends to ripen late September-early October. Arrived in the Langhe in the nineteenth century, it was recovered in old vineyards of Monforte in the mid 70s.

The grapes are harvested manually in the last ten days of September. It is a late harvest, carried out when most of the berries are affected by botrytis cinerea(noble rot). After crushing and de-stemming, the must undergoes a short maceration in the press. The fermentation takes place partly in stainless steel tanks at controlled temperature and partly in oak barrels at cellar temperature (16-20 ° C). At the end of the alcoholic fermentation, the wine is left on the lees with frequent batonage to malolactic occurred. Later, still performs regularly batonage, the wine is left on its lees until June, when is racked before bottling.

To pair with shellfish, fish in general, but also with medium-aged cheeses.

Josetta Saffirio winery has 200 years of tradition in cultivating the vineyards. The wine production started in 1975 when Josetta Saffirio took over the winery from her father. After a couple of years the efforts of Josetta and her husband Roberto were rewarded by a great quality of Nebbiolo. In 1985 they presented the first Barolo with the current label. All labels with gnomes were designed by Josetta.

In 2000 the winery was taken over by their daughter, Sara, who decided to devote herself to the vineyards. In 2006 the new sustainable cellar was built, fully integrated with the surroundings and isolated with the natural cork.