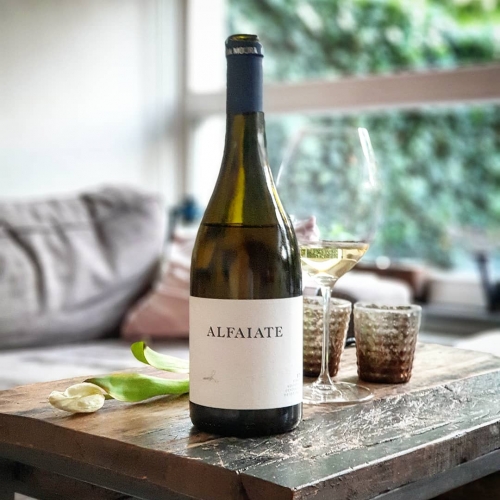 Hope summer will arrive soon in the Netherlands. Let’s challenge the weather and open this nice white wine from Portugal.

In the glass a bright citrus color.
On the medium nose aromas of ripe pear, pineapple and citrus with light vegetable hints.
On the palate dry, medium+ bodied with medium+ acidity and freshness. Light waxy and concentrated flavours of pear, pineapple, peach and a nice long refreshing aftertaste.
Good match with pasta, pork, shellfish and lean fish.

The small-scale Portocarro winery (18 ha) is located on the Sado River in the Western part of the Setúbal region. It belongs to the DOP Península de Setúbal, ca 100 km South of Lisbon. Portocarro initial vineyards are located approx 20 kilometers away from the Atlantic ocean, which inland does have its moderating influence on the warm climate on the border with Alentejo. Two additional vineyards have been bought recently (in the Melides hills) which literally face the ocean no more than 10 km away.

The vineyards of Portocarro, whose planting began in 2002, are located at the highest point of the region on the South bank of the Sado River and face South, benefiting from many hours of sunshine and good drainage. Vines are nourished by a light clay soil, also very rich in sílica and calcium, with a Ph around 7.5.

The philosophy of the owner and winemaker, José da Mota Capitão, inspired by biodynamic principles, goes towards minimal intervention and an entirely crafted production. The wines are aimed at the discerning consumer who looks for and enjoys to taste the difference. The first wines from the winery were directly among the most appreciated wines in Portugal. In 2015, the highly respected Portuguese magazine "Wine - Essencia do Vinho", nominated José as Producer of the Year. In 2016, he actually won this award.