Back to overview Previous review Next review
search
Jan26 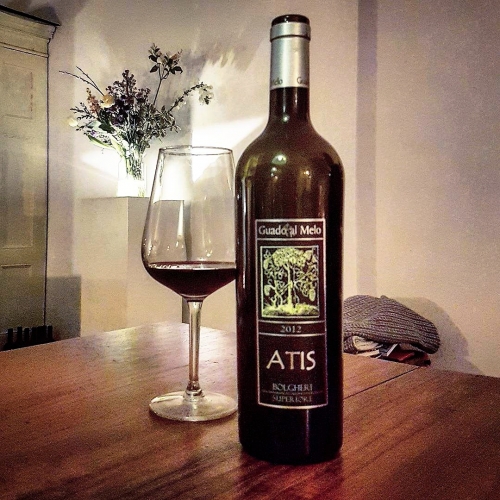 Do you like Bolgheri? This one has 3 glasses Gambero Rosso.
Mainly Cabernet Sauvignon and some Cabernet Franc and Merlot.

Two years in oak barrels and one year in bottle. Produced only in the best vintages.
In the glass a dark ruby red color.
On the nose delicate aromas of black currant, dark cherries, liquorice and balsamico with hints of leather and tabacco, pepper and some mint.
On the palate medium / full-bodied with still active tannins with some spicy bitterness, full but soft in the mouth and a medium-long finish. Nice balanced wine which can stay some more years in my cellar.

ATIS is our Superior Bolgheri and with it we express the greatness of our territory without modifying its essence, in a subtle equilibrium between our work and the naturalness of the earth and the vines. It is a wine in which Mediterranean power is mitigated by the innate elegance of the territory and its main variety, Cabernet sauvignon, with a little part of Merlot and Cabernet franc.

We dedicated our wine to the Etruscans who lived in this land, the first wine-growers in Italy. Atis was the name of a mythic king, grandchild of Zeus, which is at the origin of Etruscan people, according to a legend. The drawing represents a grape vine “married” to a tree, like it was grown by Etruscans. In the ancient poetry it was the indissoluble love metaphor.

VINEYARD: from selected micro-parcels of the vineyards Campo Grande and Campo Ferro, on the hills of Bolgheri. Alluvial soil, with good pebble-gravel texture and moderate clay content. Mediterranean climate refreshed by sea winds, in summer significant temperature range between day and night. Produced with sustainable practices.

PRODUCTION: Produced only in the best vintages, the selected grapes are vinified without correctives or additives which would alter the original characteristics. Refined on the lees for 24 months in oak barrels (only 10% new) and almost 12 months in bot-tle. Not filtrated.