Back to overview Previous review Next review
search
Jul1 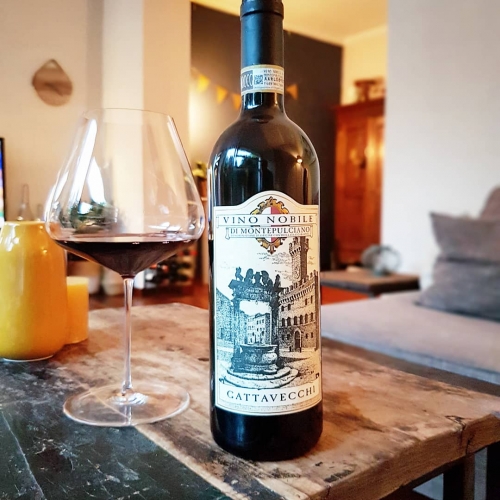 In September, the grapes are hand-picked and selected to guarantee the highest quality.

The wine cellar Simonelli Baroncelli in Montepulciano was bought in 1958 by the Gattavecchi family. Formerly this cellar belonged to the monastery of the "Padri Serviti". The wine cellar is deeply excavated in tuff. In addition, a restaurant has been built where you can taste the wines and enjoy delicious food. An absolute must do when you are in Montepulciano.

As you know 2015 is an excellent year for most Sangiovese areas. They had a good summer with plenty of heat, but also cooler nights that helped to keep the grapes balanced.

This red one is a blend of 90% Prugnolo Gentile (Sangiovese) and 10% mixture of native red grapes.

In the glass dark garnet red color showing long tears.
On the nose intense aromas of cherries, plums and blueberries with well integrated hints of leather, hay and spices.
On the palate full-bodied, dry with nice freshness and acidity. Well balanced red with still tight tannins and flavours of black cherries, earth, leather and spices. The aftertaste is long with light smokyness. This wine will only get better in the coming years.