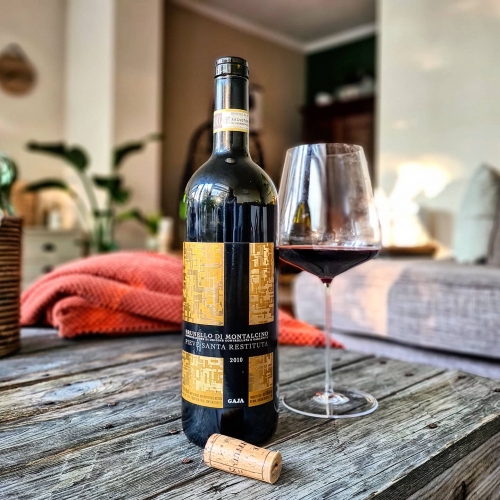 As usual, Gaja does not compromise on quality in the production of his Brunello di Montalcino. For example, he sold his entire crop in bulk twice when 2002 was ruined by heavy rainfall and 2003 by a heatwave.

In addition to the regular Brunello di Montalcino, Gaja makes the elegant, “feminine” Rennina and the powerful, “masculine” Sugarille. Mediterranean climate. The soils of various vineyards from Torrenieri, Rennina and Sugarille consist largely of limestone, sand and clay.

The grapes are harvested separately and fermented on stainless steel. After this, the wine is aged in wooden barrels for 24 months, after which blending takes place. The wine is then aged in concrete barrels for another 6 months. After 2 years of bottle maturation.

In the glass a deep ruby red color with brick edges.
On the medium(+) nose aromas of dark cherries, ripe red fruit and vanilla with hints of cedar, chocolate, graphite, forest floor and leather.
On the palate dry, medium(++) bodied with medium acidity and round polished tannins. Flavours are a recall of the nose and supplemented with spices, caramel and dried herbs. Nice long aftertaste.