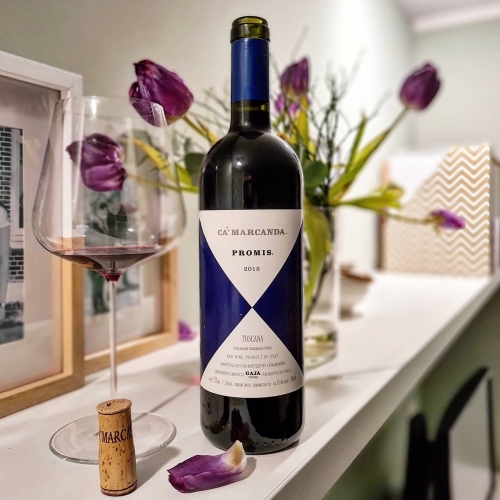 Angelo Gaja (1940) is a famous name in the wine world, his insights have been invaluable for Italy as a wine country and for Piemonte in particular. It is by far the wine producer with the greatest international reputation, has by far the most awards from Gambero Rosso and could thus call itself one of the best producers in Italy.

Ca’Marcanda is GAJA's winery in the Promised Land of Bolgheri, Tuscany. Bolgheri is seen by the Italians as the Bordeaux of Italy. In addition to the Sangiovese grape, a lot of work is done here with the grapes Cabernet Sauvignon, Merlot, Petit Verdot and Cabernet Franc.

The grapes for this wine come from Bolgheri located in the Maremma region, the relatively cool coastal region south-west of the Tuscany area. They have been producing three wines there since 2000:'Magari' (merlot, cabernet sauvignon and cabernet franc) and the top wine 'Ca'marcanda' itself (DOC Bolgheri, made from merlot, cabernet sauvignon and cabernet franc). The wines from the two domains Pieve Santa Restituta and Ca'Marcanda are supervised by oenologist Guido Rivella.

This wine 'Promis' is from Gaja's' young vines' wine' from the loam and clay parts of the Ca'Marcanda vineyards, composed of 55% Merlot, 35% Syrah and 10% Sangiovese, each fermented separately in stainless steel tanks. After maturing for 12 months in old barriques, the wines are blended and aged in the bottle for several months before being marketed.

In the glass a deep ruby red color.
On the medium nose aromas of dark cherries, blackberries and red currants with hints of chocolate, tobacco, spices and vanilla.
On the palate dry, medium(+) bodied with medium acidity and medium fine integrated tannins. Flavours of red cherries, blueberries, black olives, balsamico and spices. Very nice and elegant but I expected some more fireworks. Medium length finish.