Back to overview Previous review Next review
search
Jan28 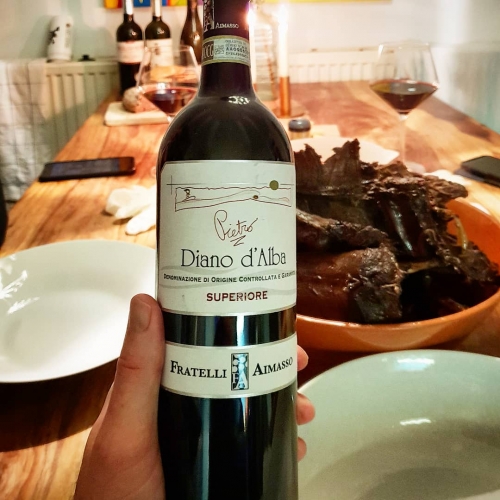 On the background preparations for the stew which was very tasty.
The best, most concentrated specimens especially from the region around Alba - can easily age one year or three, but few wines really improve with aging. This one is already 4 years old but still alive and kicking.

Dolcetto di Diano d’Alba and Dolcetto di Dogliani districts are generally recognized as the source of some of the Piedmont’s best Dolcetto. While there are some minute differences between the Dolcettos produced in these two regions, in general the wines are more full-bodied, structured and age-worthy than are Dolcettos from other districts.

In the glass a dark ruby red color.
On the medium+ nose aromas of dark cherries, plums, liquorice with hints of chocolate, earth and black pepper.
On the palate dry, medium+ bodied with soft tannins, medium acidity and flavours of dark berries, cherries and earthy hints. The finish is long and gentle.

The winery can count on about 8 hectares of vineyards, among which Dolcetto plays the main role, and a production capacity of about 50.000 bottles.

The taste is always fairly soft, with few acids and especially fruity without hard tannins. The name Dolcetto (small sweet) refers to the fairly low acidity of the wines, and not to the sweet that the wines would have, on the contrary.

Dolcetto is admitted in no less than 15 appellations, in which she plays or can play the first violin in 11 appellations.
Dolcetto is an easy grape, because it ripens up to four weeks faster than Barbera and Nebbiolo. That is why you find them in a huge number of places in Piedmont, even in Liguria, where you will find them as Ormeasco, a local clone.