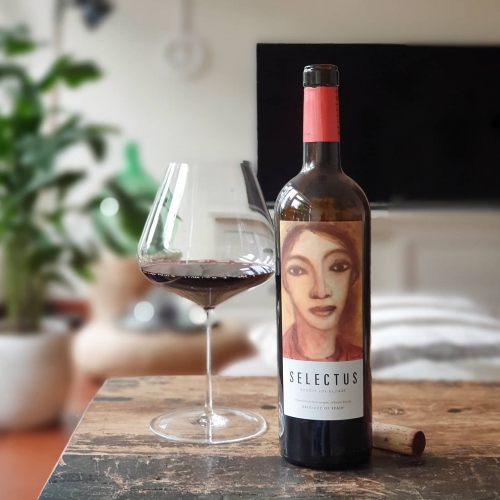 Spanish blend with a lot of French grapes. Finca Los Aljibes is located on the central Spanish plateau of Meseta in Chinchilla de Montearagón (Castilia-La Mancha). It is built in the typical La Mancha style and houses a Bodega with 178 hectares of vineyards and horse farms. So a big one.

They chose Syrah, Cabernet Franc, Cabernet Sauvignon, Merlot and Petit Verdot grapes for its 'Selectus' 2007, grown on the nearly 1,000 meter high vineyards. These were hand selected in the vineyard and then again on the selection table. Then they slowly fermented in a stainless steel fermenter for three weeks. The malolactic fermentation took place in new French oak barrels, where the wines matured for another eighteen months. Finally, the cuvée of the five grape varieties was brought together in large wooden barrels, where the wine was kept for another six months before being filled. Since then, the 'Selectus' in the Bodega cellars has reached perfect drinking maturity.

A very nice value wine. Only € 15,- for this blend. (2 points extra) This red blend has reached its peak in terms of complexity and balance but still enjoyable to drink.

In the glass a deep ruby red color.
On the medium+ nose aromas of overripe blackberries, dark forest fruit and plums with hints of earth, smoky cedar and balsamico.
On the palate dry, medium++ bodied with medium acidity and nice integrated tannins. Flavours of dark cherries, cedar and chocolate with a nice long finish.