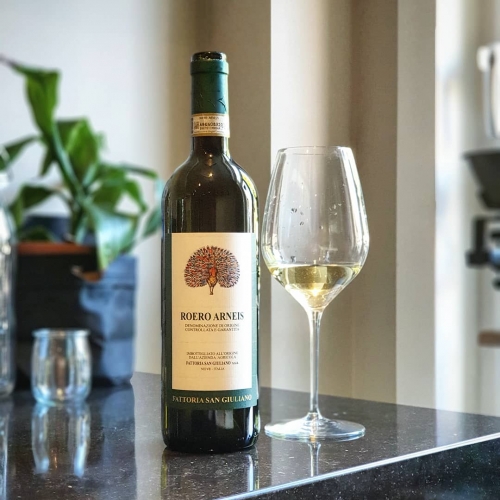 The Arneis is also called "white nebbiolo" or "little king", which indicates the importance and noble character of this grape. It is one of the most important white grape varieties in (Northern) Italy and is actually only cultivated in Piedmont. It is therefore only used under 2 appellations: the Roero Arneis DOCG and the Langhe Arneis DOC.

The oldest known mention dates from 1478 from the area of Canale, where the Renexij was written, probably the Renesio hill. Until the 1970s, a little Arneis was often added to the red wines of the Nebbiolo to make them less firm, although he was also planted between the nebbiolo as protection against birds.

The Arneis is not an easy-to-grow grape (its name in dialect also means “a small burden pack”) with a relatively high susceptibility to disease and low yields, and is therefore partly out of the picture. From the 1980s, attention shifted from quantity to quality, and the Arneis came into the picture again for its good taste characteristics. Since that time, he has first become popular in Italy, and in recent years he has also received increasing international recognition. Meanwhile, it is one of the most important and highly appreciated white wines from Italy.

This white wine is fermented in temperature controlled stainless steel tanks for 20 days, where it remained for 8 months. Prior to release, the wine aged in bottle for 6 months.

In the glass a straw yellow color with green reflections.
On the medium nose aromas of almonds and fresh notes of citrus, peach and orange peel with apple blossom.
On the palate dry, medium bodied with medium acidity and nice freshness. Flavours of peach, apples and a medium length aftertaste.