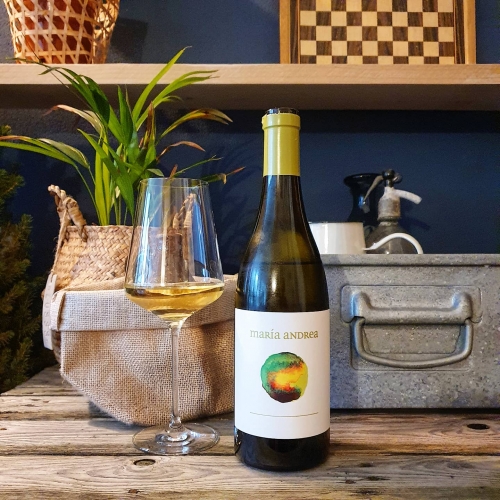 Blend from Ribeiro (Galicia) with 50% Treixadura, 25% Albariño, 25% Loureira
You know the location of D.O. Ribeiro? It’s close to the sea. North-West Spain near the border of Portugal (Vinho Verde)

Eduardo Rodriguez Peña, a business man from this region (hotels, cafés) decided to make wines of his native region . He bought an old bodega overlooking the river, to have the vineyards and buildings completely removed. Extensive soil research followed and, based on the outcome, the native grape varieties were planted on the most suitable plots.

The bodega was built in the hill among the odd vineyards, which are not treated with fertilizer or chemicals, to use the soil as efficiently as possible. The basement, which is partly located underground, has a constant temperature of 14 ° C in the winter and 15 ° C in the summer. Thanks to the built-in chimney there is a constant flow of fresh outside air. This ensures that no chemicals are needed during the processes.

In order to make the best wines from Ribeiro, he found the highly respected oenologist Alvaro Bueno in Galicia (what's in a name?) Ready to take on that challenge. And it is now clear why señor Bueno is highly valued. He lets the various orchards reach their ultimate maturity, after which the perfectly ripe grapes undergo a carbonic freeze, so that the softpress presses the frozen fruits into countless crystals, so that the extracts are released within a few hours. A powerful process withy a great result!

In the glass a pale golden yellow color.
On the medium+ nose aromas of citrus, apple, quince  and melon with hints of flowers,herbs and honey.
On the palate dry, medium+ bodied with medium+. Round, light creamy with nice freshness (acidity) showing flavours of melon, quince and mediterranean herbs. Finish is long and persistent with light almond aftertaste.