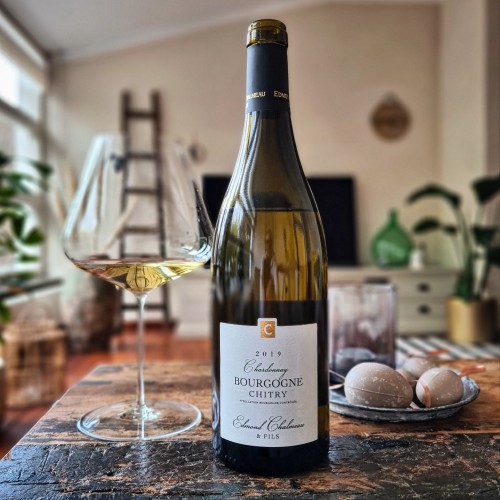 Bourgogne Chitry is located around 110 kilometers (70 miles) north-west of the main Côte d'Or winegrowing center around Beaune. The commune only lies around 12km (7 miles) from Chablis, and in the first half of the 20th Century the wines were often sold as Chablis Villages. Today there are around 40 hectares of Chardonnay and 27 of Pinot Noir.

Variety: Chardonnay
Appellation: Chitry
Vineyard: The soil is made up of limestone and marl-limestone formations
Vinification: For their white wines, they like alcoholic fermentation long and not very tumultuous in which we detemperature to keep it between 20 and 24 degrees, depending on the type of wine to preserve the finesse and expression of the terroir.

In the glass a medium citrus yellow color.
On the medium nose aromas of citrus, apples and banana with hints of white blossom and chamomile.
On the palate dry, medium bodied with medium(+) acidity and nice freshness. Round and soft in the mouth with enough acidity and a recall of the nose and a medium length final. Ok Bourgogne. Expect no top Bourgogne but a nice white one for the price.

An old winemaking family established itself in the heart of Chitry: Franck Chalmeau took over from his father Edmond in 1991, before his brother Sébastien joined him. An area that has gradually evolved from polyculture to only viticulture (18 hectares) and has become a reference in Burgundy Chitry, which has also developed a commercial activity.