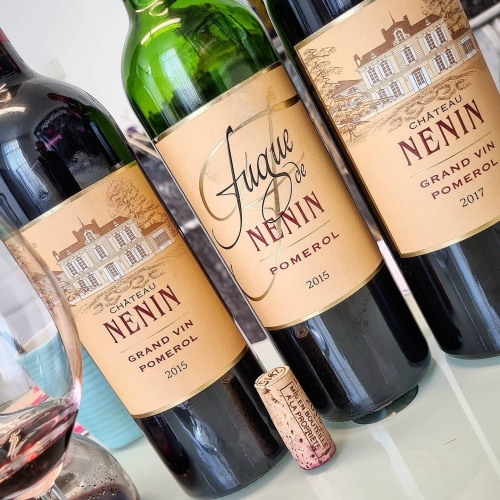 A couple of weeks ago I had a virtual tasting with Antoine Gimbert - Export director from Domaines Delon. Soon also on the website.

The Delon family owns and operates wineries such as Leoville Las Cases and Clos du Marquis in Saint-Julien, Potensac in Medoc and Chateau Nenin in Pomerol. In 1997, Jean-Hubert Delon bought the 78-hectare estate from cousins, whose family had owned Nénin since 1847, and completely transformed the property. Vines were uprooted and replanted, a completely modernized barrel room was installed, and the cellars were expanded and renovated.

The vineyard of Château Nénin extends in one piece with the exception of a single plot. Château Nénin represents a large area: 32 hectares of vines in production. As a result, its terroir includes all the diversity of soils characteristic of Pomerol. It consists mainly of oligocene deposits covered with alluvial gravel formations of the Dordogne; siliceous clay and gravel, quartz, granite, ferrous dirt and basalt stones. The vines of Château Nénin are planted on the largest clay soils of the Pomerol plateau.

The Fugue de Nénin is the second wine of Château Nénin. A blend of 90% Merlot and 10% Cabernet Franc.

Fuga de Nénin was created and marketed in 1997. Fugue is a reference to the musical universe; it is a repetition of the main theme. This interpretation takes on its full meaning when tasting, since fugue matches the tones of its predecessor and at the same time offers an entertaining and seductive expression. The wines are round and silky and are faster to taste than that of the Grand Vin.

In the glass a deep ruby red color with garnet reflections.
On the medium(+) nose aromas of plums, prunes and spices with hints of cedar, chocolate, vanilla and violet hints.
On the palate dry, full bodied with medium(+) acidity and medium(+) ripe tannins. Flavours like raspberries, black currants, tobacco, cinnamon and cedar with a nice lengthy (medium+) fisnih.