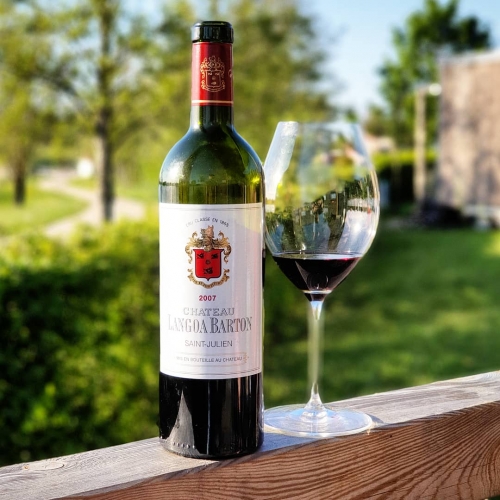 Château Langoa Barton - Saint Julien 2007 (89 TSW)
During my short trip to France I took this red wine with me from the St. Julien region.

St. Julien, the smallest of the four famous appellations of the Haut Medoc, is known for highly extracted, finely structured, Cabernet-based reds. It is nestled between Pauillac to the north and Margaux to the south. Like St. Estephe, there are no first growths in this area.

Château Langoa Barton is a third cru of the Bordeaux wine classification system from 1855. Like the Lynch family of Château Lynch-Bages, the roots of the Barton family are in Ireland. But an important difference with them is that the Bartons are Protestant and that they still own estates in Ireland to this day. Hugh Barton was the grandson of French Tom, who arrived in Bordeaux in 1725 and soon became an important wine merchant, Barton & Guestier. In 1821 he bought Château Langoa Barton and shortly thereafter he was able to make a down payment for the purchase of a part of the Léoville domain. Since then, both Langoa and Léoville Barton have been vinified at the Château Langoa. Langoa Barton is the château in Bordeaux that has remained in the hands of one family for the longest time and still is.

In the glass a purple red color. After 2 hour decanting the wine opened nicely.
Still youthfull on the medium+ nose with aromas of ripe cherries, bramble and licorice with nice integrated hints of smoke, green pepper, cedar and vanilla.
On the palate dry, medium bodied with blackberries, blackcurrants with notes of licorice and cedar. The tannins are rounded with a smooth body. Pleasant and very enjoyable. Can be drunk now.