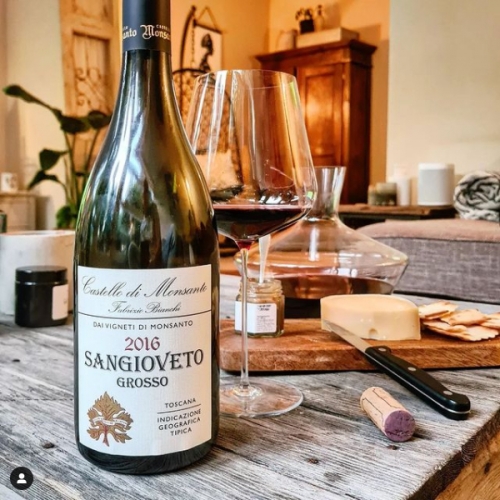 Sangioveto Grosso is made from another of their crus, the “Scanni” vineyard. This Fabrizio Bianchi Sangioveso Grosso is only produced in the peak years when the vineyard reaches the highest level: For example 2001, 2006, 2009, 2010, 2012 and currently we have reached 2016. First year of production is 1974.

This 100% Sangiovese Grosso is the embodiment of the revolutionary nature that has always been synonymous with the history of Castello di Monsanto. The vineyard was planted exclusively with Sangiovese vines in 1968 and produced its first harvest in 1974, in an exception to the Chianti Classico denomination rules that stated that no vineyards could be planted with a different ampelography to the historic system devised in 1800. The wine’s dissenting spirit has always been underlined by the decision to use Borgognotta bottles.

Vinification in truncated conical steel vats at controlled temperature with emptying system (Délestage) and pumping over for about 20 days. Aging in 500 liter French oak barrels partly new and partly second-hand for about 18 months. Bottle refining 2 years of bottle aging.

First I decanted it for 2/3 hours / still a youg wine.

In the glass an intense uby red color.
On the medium(+) nose aromas of dark cherries, ripe plums and blackberries  with hints of young leather, fennel, tobacco and spices.
On the palate dry, medium(+) bodied with crisp acidity and medium(+) tannins. Flavours of cherries, leather, black pepper, cedar with a beautiful complexity and lengthy finish. Will retry over five years.

Castello di Monsanto is home to some of the best vineyards within the appellation and houses the largest collection of “old vintages” of Chianti Classico. In 1962 Monsanto was the first winery to make a Chianti Classico Cru from the single 'Il Poggio' vineyard. Furthermore, in 1981 Monsanto harvested the first 100% Cabernet Sauvignon, Nemo, from the Il Mulino vineyard.