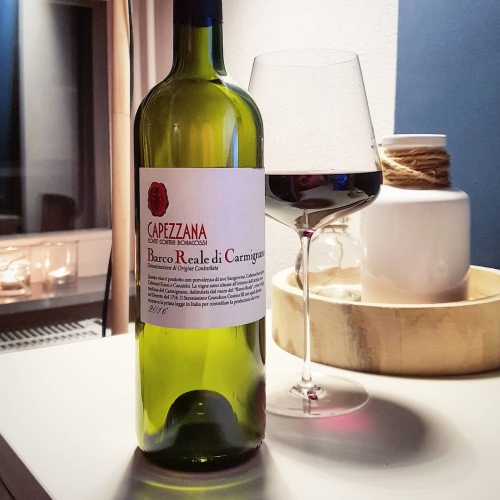 The Capezzana Barco Reale di Carmignano is a blend with 70% Sangiovese, 15% Cabernet Sauvignon, 10% Canaiolo and 5% Cabernet Franc from Carmignano, Tuscany, Italy. The wine is aged in French oak barrels for 6 months and another 3 months in bottle before release.

Carmignano is one of the lesser-known DOCG wines made in the famous Tuscany wine region of central Italy. Carmignano, the village from which the DOCG takes its name, lies 12 20km west of Florence, on the eastern slopes of Monte Albano (home of Chianti Montalbano). It was one of Italy's earliest regulated wine names, long before the country's DOC/G system was introduced in the late 1960s.

Carmignano wines are dry reds based on a standard modern Tuscan blend of Sangiovese (at least 50% of the final blend), Canaiolo Nero (up to 20%), Cabernet Sauvignon and Cabernet Franc (10–20% each). The wine is similar in style to its more famous cousin (and neighbor) Chianti, which may now also be made using a portion of Cabernet Sauvignon.

In the glass a dark ruby red color.
On the medium+ nose aromas of dark cherries, blackberries with hints of sweet vanilla and earthy hints.
On the palate dry, fruit driven, full-bodied with present tannins and medium acidity showing flavours of blackberries, plums, cherries and black pepper. The finish is stong but elegant.