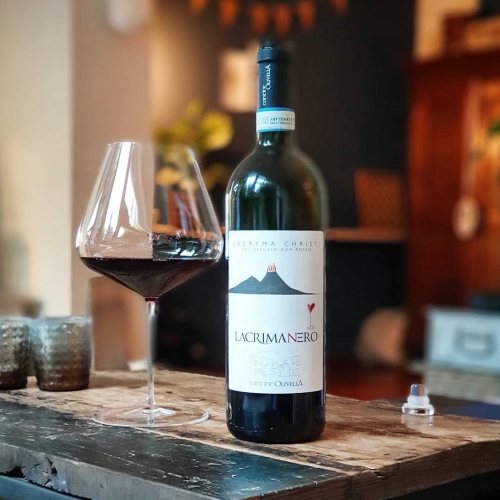 In 1974 at the slope of Monte Somma close to the “Olivella” spring, from which the winery takes its name, an ancient fragment of an earthenware wine jug was discovered. This is proof of the wealth of an area whose wines were some of the finest of ancient Rome on the market with Pompeii. An abbreviated inscription of “Sextus Catius Festus” is engraved on the opening of the earthenware jar along with a seal depicting a stylized leaf, similar to a heart. The seal tellingly became the logo for “Cantine Olivella”, and was modified into a wine glass. This is the perfect representation of the union between land, art and passion, namely three hearts beating in unison in the world of Cantine Olivella.

The origins of the wine are shrouded in legend: it is said that the son of God, recognizing in the Gulf of Naples a piece of sky torn by Lucifer during the fall towards the underworld, wept and where the divine tears fell, the vines were born. The wine produced with the grapes of these vines took the name of Lacryma Christi.

The grapes are harvested by hand in small crates are immediately taken to the cellar, after a manual selection they are de-stemmed with whole grain, they enter the 30 hl tanks where they ferment in contact with the skins, with the wetting system of the shower cap. Maturation 7 months in stainless steel tanks and 3 months bottle aging.

In the glass an intense dark ruby red color with purple reflections.
On the medium+ nose aromas of ripe cherries, blueberries and ripe plums with a background of smoke, figs and licorice.
On the palate dry, medium bodied with nice balance and warm mouthfeel. Medium+ acidity and soft tannins and a rich and long aftertaste.