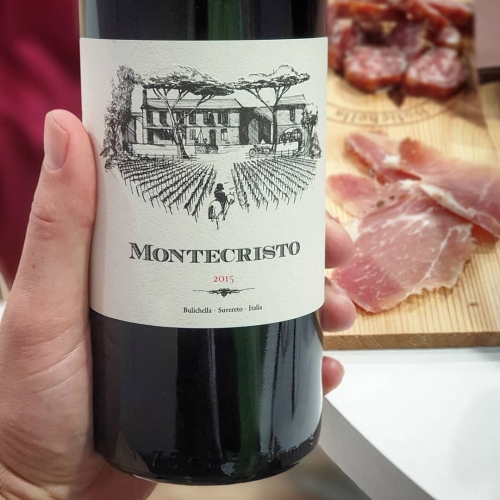 During Vinitaly I had the opportunity to try the wines of Bulichella. This was also the moment they presented their new labels. Now in August I will visit the Bolgheri and Maremma region so mabye also this winery.

In the glass a dark ruby red color.
On the medium+ nose aromas of dark plums, blackcurrants and dark cherries with hints of sweet spices, herbs and tobacco.
On the palate medium+ bodied with concentrated notes which are a recall of the nose with cedar and cassis hints. Very nice harmony, freshness and elegance in the glass with fine grained tannins. Will get more points within some more years.

The company, born from a project of rehabilitation and social reintegration, has been in the hands of Hideyuki Miyakawa since 1999, who came to Japan with the motor from Japan for the Olympic Games and subsequently became one of Giugiaro's most famous designers. Bulichella Suvereto Docg Montecristo 2015 is a wine that was strongly supported by Miyakawa, who proudly presented his new label as a result of a collaboration with oenologist Luca D'Attoma and Andrea Lupi.