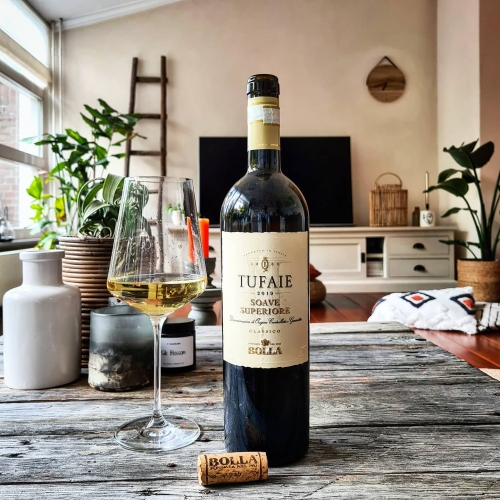 The name Tufaie comes from the old name of the Tufa Quarries that once surrounded Verona. This gold colored volcanic stone, like the color of this wine, was used to build the most beautiful churches and the 'Teatro Romano'.

The fermentation process of the Tufaie takes place under controlled temperature for about twenty days. The yeast cells remain in contact with the wine for as long as possible after fermentation. During this period, the yeast cells are stirred twice a week to increase the contact surface. This technique is also known as 'battonnage'. This provides an extra flavor dimension. In addition, part of the wine undergoes malolactic fermentation to preserve fruit.

In the glass a straw yellow color with golden reflections.
On the medium nose aromas of peach, citrus and melon with hints of herbs, vanilla, white flowers, almond and honey notes.
On the palate dry, medium(+) bodied with medium acidity and nice freshness. Fresh, soft and round in the mouth with the typical almond taste in the medium(+) length finish.

This Tufaie Soava is a perfect accompaniment to appetizers and snacks, risotto, veal, shellfish, vegetaria meals or freshwater fish.

Bolla is one of the oldest Amarone houses and more than 130 years later, the winery Bolla has grown into a world-renowned winery with a wide range of wines. What has remained is the unique taste of the Bolla wines arising from the special climate and terroir of the Veneto area. Oenologist Christian Zulian has been a winemaker at Bolla since 2015. Before joining Bolla, he spent thirteen years at Marchesi Antinori and several years at Domaine Baron de Rothschild.