Back to overview Previous review Next review
search
Sep19 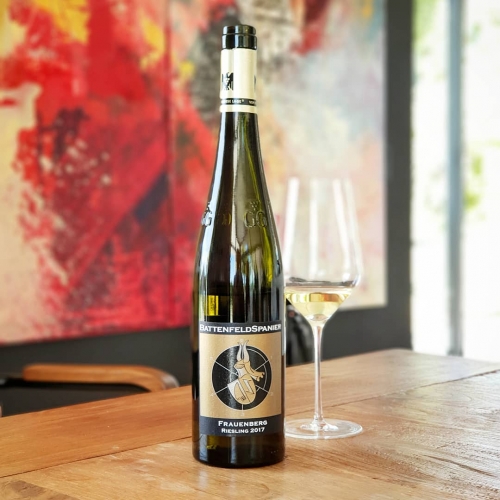 Last week we visited Battenfeld-Spanier and Kuehling-Gillot in the Southern Part of Rheinhessen close tot he border with the Pfalz region.
In the case of Hans Oliver Spanier, who already took over the parental vineyard in the Hohen-Hülzen in Rhineland-Palatinate in 1991 while he was 20 years old. Deeply connected to the earth and the soil and full of fascination for viticulture, he overstepped his parents' plans and laid the foundations for today's winning series of the winery. Shortly after the takeover, he put the Spanish winery together with the neighboring winery Battenfeld and in 1993 he was one of the first to convert the winery to organic wine. In 2007 the complete focus on biodynamic production followed, making it one of the pioneers of biodynamics in Germany.

Since 2007 also Kühling-Gillot has been produced in the Hohen-Sülzen area. The most significant difference between the wines lies in the harvest time. Soon more about this.

Just north of Hohen-Sülzen is the district Flörsheim, in which the vineyard Frauenberg is located. It is one of the few steep slopes in the region. The overlay consists of chalk gravel, while the subsoil is the pure limestone rock. The exposed location and the elevated ridge of the Frauenberg challenge the vines to everything. Together with the mineral rich but extremely barren soil, in which the vine must root very deeply in order to get nutrients, the conditions for a long and healthy growing season are ideal.

Ofcourse. This wine is extremely young but with huge potential fort he upcoming years.

In the glass a bright golden yellow color.
On the nose intense fresh aromas of citrus, apricot, green apple with hints of crushed stone and flint.
On the palate very dry, well balanced and very concentrated with salty minerality and high acidity. Flavours of orange zest, lemon and apricot with a long and intense finish.