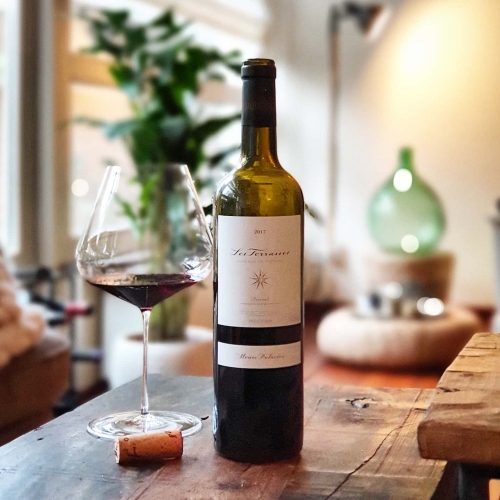 I found the best price fort his one on decantalo.com @decantalo

Les Terrases is a blend of the varieties Cariñena, Garnacha, Cabernet Sauvignon and Syrah. The grapes originate from 60 years old vines in small parcels from this region, all are controlled by the winery.

For its production, the winemaking process is performed in stainless steel, concrete and different wood containers. This method attempts to extract the maximum expression of the grape and the terroir. After these processes, Les Terrases is aged for 12 months in French oak barrels, 20% in new and 80% in second and third year barrels.

In the glass intense dark colored, purple-black with violet edge.
On the medium+ nose complex aromas of raspberries, blackberries and plums with hints of vanilla, dark chocolate, licorice and mint.
On the palate dry, medium++ bodied + medium acidity and ripe tannins. Flavours of blackberries, cassis, spices, chocolate and mint. Well balanced and light creamy in the mouth. Long and lingering finish! Will get better in some years

The oenologist Álvaro Palacios is a Spanish wine celebrity with a few of his creations being regarded now as a historic wine: L'Ermita and the Finca Dofí. These wines have taken Priorat to be known all around the world.

Álvaro Palacios was the seventh son in a familiy of nine children and he was expected to go to Bordeaux to study oenology and viticulture. During an internship at Château Petrus he became fascinated by the special terroir and the greatness of the wine. Instead of returning to the family domain after his studies, he chooses to go his own way.