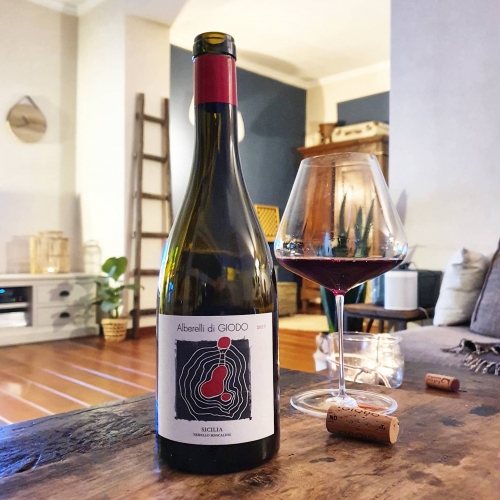 Carlo Ferrini is one of Italy’s best-known winemakers, boasting a professional career spanning more than 30 years throughout the peninsula, from Trentino in the north to Sicily in the south, and “wine offspring” that are among Italy’s most prestigious labels.

In 2000 he managed to acquire a well-situated sliver of Brunello vineyard just before land prices started to skyrocket.  Next to the Montalcino adventure where they produce one of the best Brunello they started a new project in Sicily.

Carlo Ferrini, who has been visiting Sicily as a winemaker for over 15 years, could not resist falling under the fascination of Mount Etna and its main grape variety, Nerello Mascalese. Such was the beginning of Alberelli di Giodo, a wine whose first vintage was 2016. The vineyard is little more than a hectare, growing at 950 metres on the volcano’s slopes, extraordinary pre-phylloxera vines 80-100 years old that are trained to the traditional low-bush alberello style.

Alberelli di Giodo matures 12 months in small 5-hl French oak casks. On its label too is the grape-variety figure, but here he represents Nerello Mascalese, and on Etna’s summit he holds up by himself the world, because he interprets, undiluted, the vineyards of Etna.

In the glass a pale garnet red color.
On the medium+ nose aromas of rose petal, cherries and strawberries with hints of dried herbs, orange peel, balsamico and baking spices.
On the palate dry, medium bodied with medium+ acidity and medium tannins. Flavours are a recall of the nose with a clear mineral line. The finish is long and persistent. Very nice Etna wine!