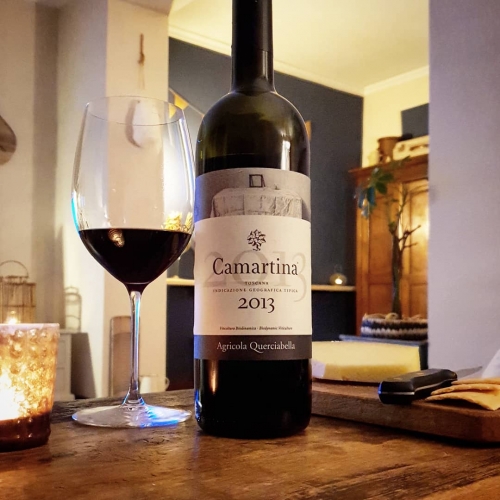 Blend of 70% Cabernet Sauvignon and 30% Sangiovese.

During Vinitaly I had the chance to try some of the wines of Querciabella.They have a beautiful range of red wines and also their white wine ‘Batar’ (blend of Chardonnay and Pinot Bianco) is very impressive.

This Camartina blend was among the first 10 Super Tuscans to appear on the market.???? The soaking and alcoholic fermentation are done in stainless steel tanks for 12 days. Malolactic fermentation also takes place in steel tanks. This is followed by maturing on French barriques of 24 months, which usually consist of half new barrels. On average, 15.000 bottles of Carmartina are produced annually.

This wine is still very young so I decanted it for 2 hours and it opened very nicely.
In the glass a dark ruby red color with garnet reflections.
The clean nose shows medium+ complex aromas of plums, ripe cherries and cassis with starting hints of leather, spices and mineral undertones.
On the palate dry, full-bodied with with complex flavours recalling the nose. The tannins are still tight and the finish is long and persistent. I am very lucky to have one bottle to keep 5/10 years in the cellar.

The Querciabella winery, which means beautiful oak, is idyllically hidden in the highly rolling hills in the heart of the Chianti Classico area. The company, taken care of down to the last detail, comprises a 74 ha vineyard in the villages of Greve, Panzano, Radda and Gaiole. Querciabella was bought in 1972 by a businessman from Milan, Giuseppe Castiglioni. In the 90s his son Sebastiano took over the management of the company. 32 hectares of vineyard were also planted in the Maremma near Grosseto on the coast.