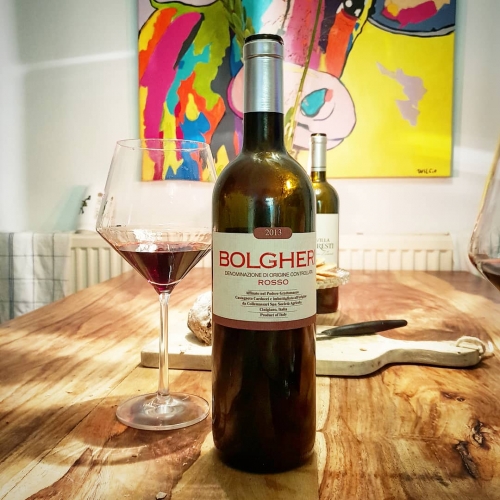 The vineyards of Grattamacco, about 27 hectares, are located on the hills (approx. 100 meters) near the Tuscan coast between Bolgheri and Castagneti Carducci. The soil is predominantly sandy, lime-containing marl and a microclimate that is strongly influenced by the winds of the sea. The vineyards are located directly near old forests.

A wine from a vineyard of 10 hectares located 100 m above sea level, where the vines flourish for 20 years on average. The density of vines is 4500 to 5400 per hectare, which yields approximately 7000 kg of grapes. Cordon pruning and vine training keep the balance; And harvesting is exclusively manual. Vinification begins with open must fermentation in conical oak fermentation barrels. Following this, the wine matures for ten months in the malolactic fermentation in barriques, some of which are two years old, while others are three years old. 6 months of bottle maturation then follows.

In the glass a dark garnet red color.
On the medium+ nose aromas of blackberries, cherries and red berries with well integrated hints of black pepper, chocolate and laurel.
On the palate dry, medium+-bodied with soft mouthfeel, light smoky and medium+ acidity. Flavours of red berries, cassis, licorice and tobacco with a long and persistence finish.