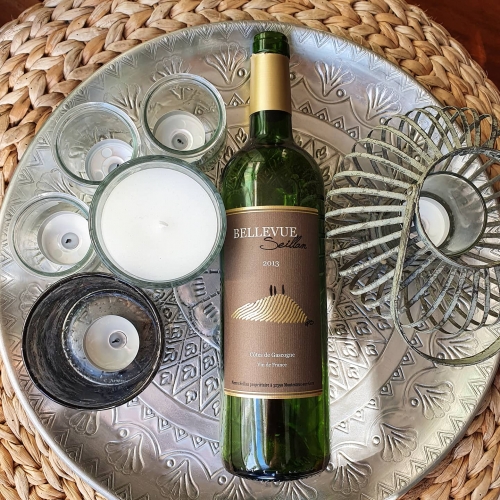 Pierre Seillan is one of the great winemakers of our time. For the three wines he vinified at the Vérité winery alone, he received 15 times 100 points from Robert Parker. However, he not only works at the Californian winery Vérité, but is also responsible for the wines of the Californian Anakota. He also produces the wines of the Tuscan Tenuta di Arceno, as well as from the Bordelaise winery Château Lassegue.

However, the basis of his skills originated in the native Gascony. There, his family owns the Bellevue-Seillan winery in the sixth generation.

Located in the Armagnac region, the winery has an excellent ten-hectare terroir. Seillan has divided this into ten different micro-crus with different soil structures and microclimates. What gives the vineyards their unique character is the composition of clay, gravel and 'peyrusquet' soils, a special form of limestone that only exists in Gascony. .

60% merlot, 25% cabernet sauvignon and 15% malbec come from the winery's ten micro-crus, which differ in composition and microclimate. That is Pierre Seillan's philosophy: to make wine better and better by understanding each plot. Confident that this terroir doesn't need a wood influence, the 'Bellevue Seillan' matured in stainless steel and cement tanks. After destemming and fermenting the individual crus and grape varieties, the wine matured in the tank for several years and then in the bottle.

This bordeaux blend from Gascony shows a deep red color.
On the medium+ nose aromas of raspberries, blackberries and cassis with hints of smoky meat, undergrowth and chocolate.
On the palate dry, medium+ bodied with medium+ tannins and acidity. Flavours of tobacco, prunes, earth and black tea. The finish has a medium length.